Erik Bais presented the results from the RIPE community wellbeing survey and shared interesting insights on how to approach mental health challenges.

Frank van Vliet kicked-off the RIPE 82 Cybersecurity Challenge. If you haven’t registered yet, drop meeting [at] ripe [dot] net an email! Frank was followed by Gerardo Viviers, our RIPE Meeting Quizmaster, who hosted a Kahoot! Quiz, sponsored by Team Cymru, and tested our knowledge on Security. Stay tuned for tomorrow’s quiz on ‘Best Practices’.

The afternoon plenary sessions saw presentations from Nico Schottelius, who asked if we’re ready to enter a post-IPv4 world, while Patrik Fältström and Stephen Farrell gave an update on the long-running debate around privacy, encryption and law-enforcement, which continues to this day.

Geoff Huston gave us an overview of DNS, how it has evolved over the years and why it’s still very important. He was followed by Daniel Wagner who gave a lightning talk on the IPFIX protocol and a useful export for IXPs, and Nigel Titley who asked the community for volunteers for the next Rob Blokzijl award.

Following up on the wellbeing talk from earlier this morning, Lenka, RIPE NCC’s management assistant and stretching coach, reminded us to take regular breaks and shared some stretching exercises to help us get re-energised.

The afternoon plenary sessions continued with Alexander Azimov, who delved into Flow Labels and how they can be used to create self-healing networks in data centres. Alexander also asked the community for volunteers to help him standardise this within the IETF.

He was followed by two Lightning Talks, the first with Christian Teuschel who celebrated the 10 year anniversary of RIPEstat by sharing some highlights and showing its evolution over the past decade. Marco Hogewoning then presented an update on NIS, looking at the European Parliament’s proposed amendments, along with the RIPE NCC’s response and next steps.

And finally, we wrapped up the evening with the SCION BoF and the informal ‘Meet the RIPE Chair Team’ and ‘Meet the RIPE NCC Executive Board’ sessions on SpatialChat.

If you missed any sessions – the recordings and presentations are available on the presentation archives! 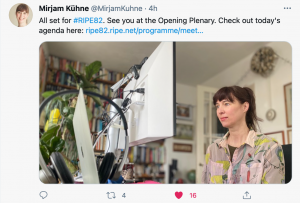 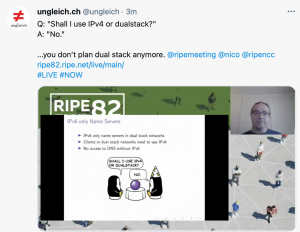 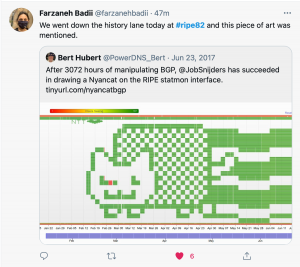 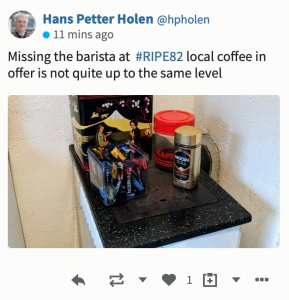 We welcomed over 1,136 of you to the second day of RIPE 82, the day on which the Address Policy, Connect, Cooperation and Open Source working groups rolled up their sleeves and got down to work, despite a few people being bleary-eyed (no doubt from having attempted to crack the RIPE 82 Cybersecurity Challenge all through the night).

The Address Policy Working Group tried something different by asking participants to watch pre-recorded presentations ahead of time, to allow for a longer discussion time. And they needed every minute of it. One of the main topics of discussion was the chicken-and-egg relationship between address distribution policies and the RIPE NCC’s Charging Scheme for members, something that will crop up again in the General Meeting tomorrow. The extended discussion time is still not enough to delve into this, and the conversation will continue on the mailing list.

Gert Doering stepped down as the co-Chair after 18 years at the helm and was warmly applauded for his long-standing contribution to the Working Group and RIPE community. Co-Chair Erik Bais welcomed on board two new co-Chairs: James Kennedy and Leo Vegoda.

The Open Source Working Group chairs boldly staked claim to the title of ‘your favourite working group session’. If you did indeed miss your favourite working group session, you missed out on Alexander Zubkov’s presentation on his Mixtoolkit, an update from Marcos Sanz Grossón on the IX-API, which is a joint effort between AMS-IX, DE-CIX, and LINX and Frederic Loui’s update on the rare.freertr.net project.

The Connect Working Group on the other hand claimed to take place under the sea (and showed the font to prove it). Simone Morandini shared insights into IXP traffic in Italy, Spain and France during COVID lockdowns, and the fun fact (this will come as no surprise to football fans) that NAMEX saw their traffic which hit their peak during a Juventus-Lazio game. Bijal Sanghani provided an update from Euro-IX and stressed the importance of mentorship. The GAIA-X initiative and abuse were also briefly discussed, with Erik Bais offering to connect discussions in the Anti-Abuse Working Group with the Connect mailing list.

EU legislation that could impact the RIPE community will be discussed across different sessions, and the Cooperation Working Group saw Agne Kaarlep of the European Commission give an overview of the Digital Services Act. In response, Polina Malaja (CENTR) explained the three recommendations CENTR sent to the European Commission on behalf of European ccTLDs, namely to include a clear liability exception for the technical auxiliary function of DNS, to clarify the definition of illegal content and to first try to address issues of content as close to the sources as possible before legislating DNS operators. Rob van Kranenburg also presented the idea of ‘disposable identities’ after disposing of his audio issues.

And finally, the Olaf Kolkman moderated the BoF on the Code of Conduct, with the CoC Task Force eager to hear from the community on how to proceed with its next steps. If you’d like to be involved, please follow the RIPE Discussion (ripe-list) mailing list. 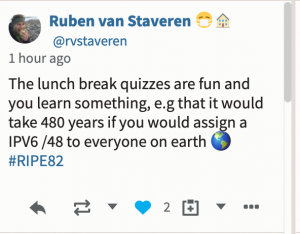 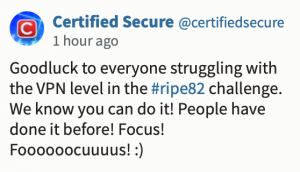 Our favourite slide of the day

Wednesday was the second day of the RIPE Working Group (WG) sessions. Here are some of the highlights from the day: 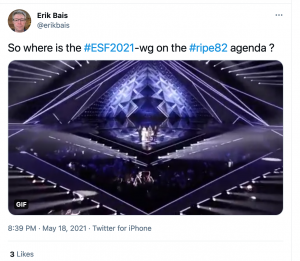 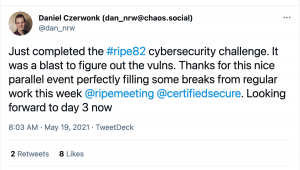 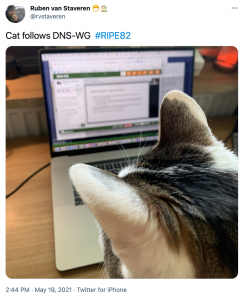 We welcomed over 1,172 attendees on another busy day of RIPE 82 with 507 unique participants on Meetecho. The IPv6, IoT, Routing and Database Working Groups were in the limelight today with lots of discussions, updates and presentations throughout the day.

The day will end with a Eurovision inspired evening of cocktails, talent contest and karaoke! Join the RIPE Dinner from 18:30 (UTC+2)

Here are some of our favourite tweets from today: 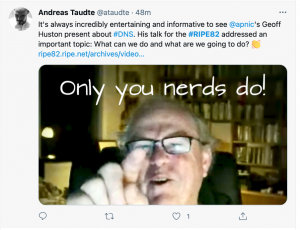 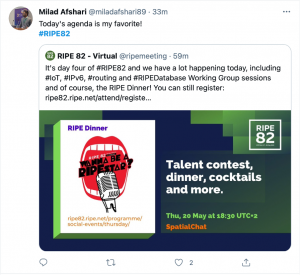 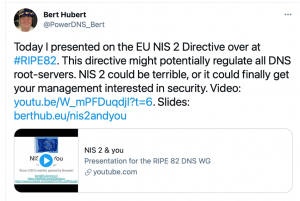 Wrapping up the meeting week, Friday focused on the RIPE Community itself – here’s a summary:

To properly mix up the virtual RIPE Dinner format, Thursday evening’s buffet of entertainment began with a cocktail workshop (everyone followed the instructions, right?) before moving to a talent show that was judged by a panel of discerning local celebrities (Alexandra Vos, Fergal Cunningham, Vesna Manojlovic, and Alastair Strachan). The result of their wild and arbitrary scoring was that Yolandi Robinson came away the winner. Imma let you finish, but Fergal should’ve won for his ability to spin a basketball while promoting the NRO NC elections. Of course, he was a judge and this might’ve raised questions about the process. The talent show was followed by the traditional mingling and dancing, albeit mediated across vast distances via SpatialChat. 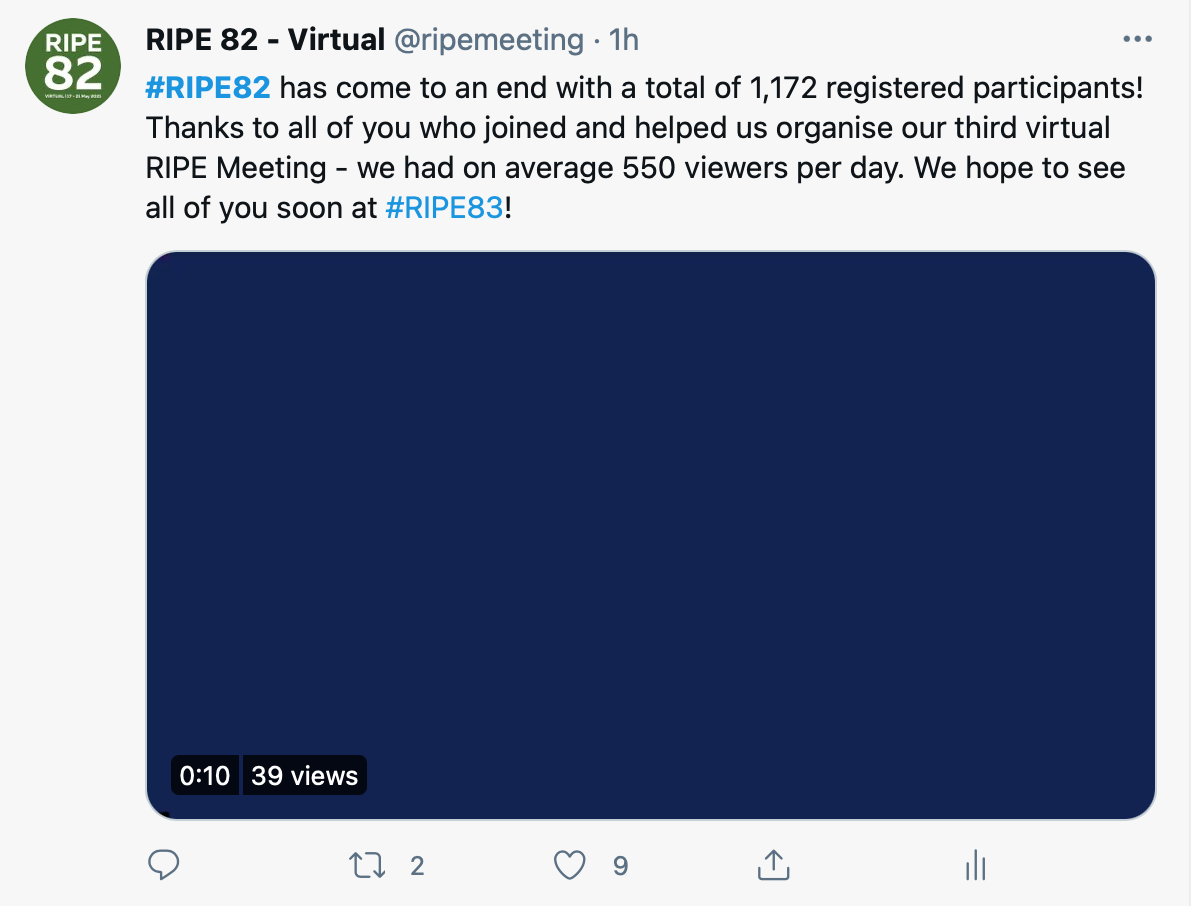 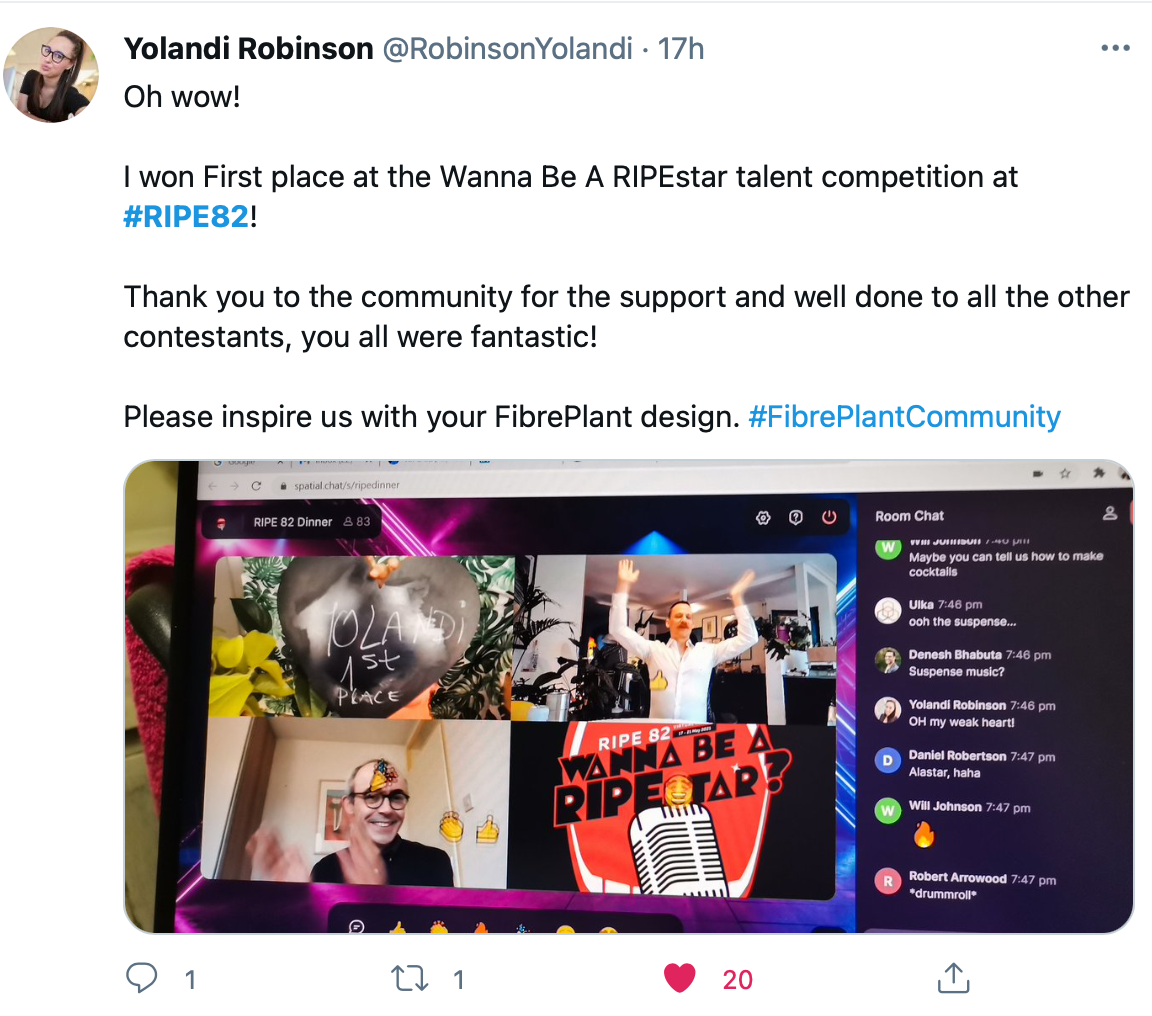 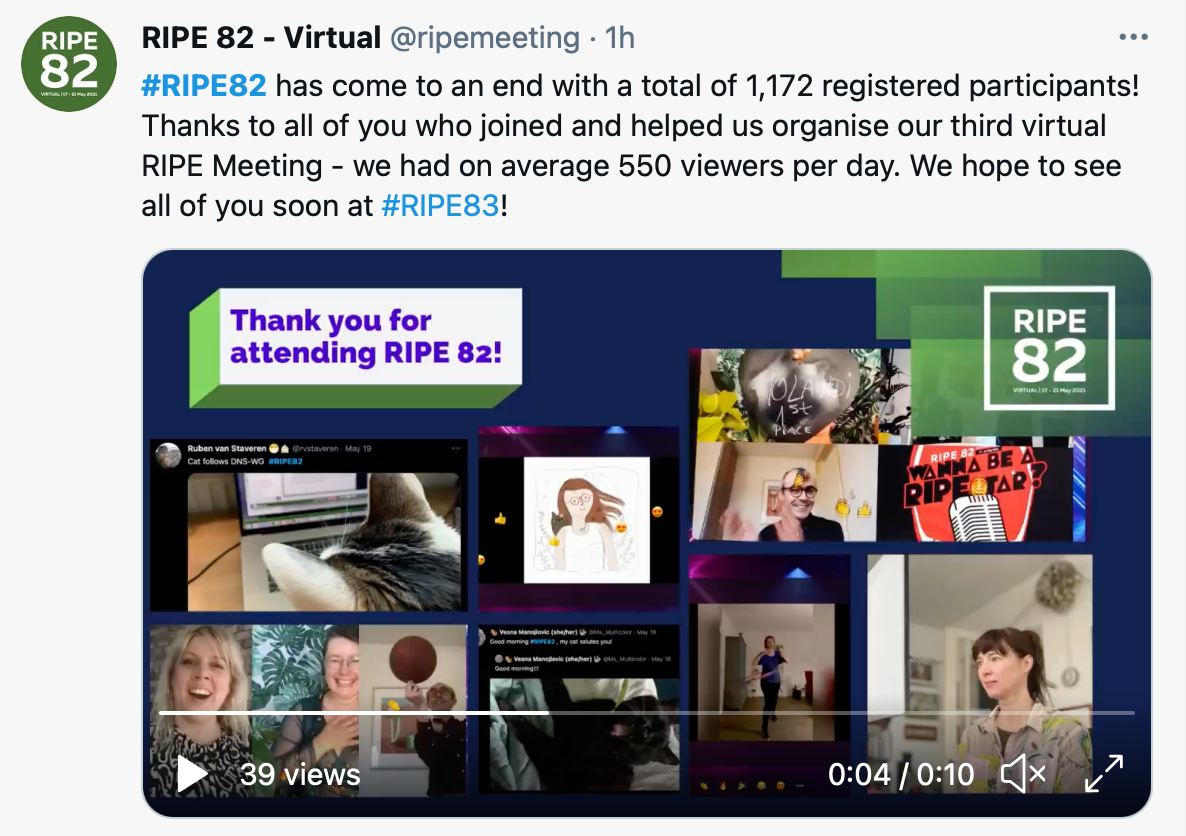